Four words: What was Nintendo thinking? Since they thought the real SMB2 was too hard, they took another game, pasted Mario characters in, and sold it as SMB2.

The gameplay is completely different. There is only a one player mode, but at the beginning you get to choose from from four characters: Mario, Luigi, Toad, and the Princess. You can still jump, but jumping on enemies no longer hurts them. Instead, they blissfully walk around with you standing on them, or you die. Nice.

To actually do damage, you generally need to pick a vegetable out of the ground and throw it at one of the enemies. You can also throw other objects including bombs, POW blocks, and certian types of enemies. 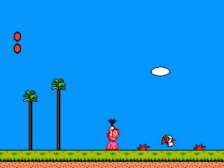 Prepare to die: I have veggies!

The game isn’t that bad, it’s unique anyway, and pretty entertaining, but to me it’s just not Mario. The replay value is decent, but this isn’t a game I’d play everyday.