Use this console to control the battle music:

Fade in to Toad and Toadette at the Announcer’s Booth.

Toad: Welcome, everyone, once again to another exciting Character Battle! I’m your host, Toad.

Toad: Tonight’s battle is one of great importance! It is the first in a long stream of battles, which will decide the fate of Toad’s Castle!

Toadette: On one side is Toad’s Castle’s best defense! Mario’s Superstars! In it includes Bowser, Princess Peach, Donkey Kong, Yoshi, Luigi, and of course, Mario!

Toad: And on the other side is their opponents, Sonic and his gang; Dr. Eggman, Amy Rose, Knuckles the Echidna, Miles “Tails” Prower, Shadow the Hedgehog, and the leader, Sonic the Hedgehog!

Toadette: Will Toad’s Castle be able to defend itself? Or will this become a Sonic fansite? Let’s find out, TONIGHT!

Toad: So, let’s get this Toad’s Castle Tournament started! Fr our first battle, it’s a fight between the heroes enemies! That kinda makes it hard to cheer for, huh?

Toadette: Nonsense, Toad! The bad guys have lots of fans! Not only that, but the bad guys are essential to stories like these!

Toadette: Yeah, I mean, if there weren’t any bad guys, nothing would happen!

Toad: Oh, you have a point, there. Well, anyway, in the right corner is Mario’s arch-nemesis! He’s a big brute with power to spare! The dreaded Koopa King, Bowser!

This tune (insert link to music I sent to you) plays as Bowser stomps onto the stage. The Crowd cheers for his awesomeness.

Toadette: And is the left corner is Sonic’s arch-nemesis! He’s a scientific genius with an I.Q. of 300! It’s Dr. Ivo Robotnik! …AKA, Eggman.

Knuckles: You know, I here they play theme music for the characters as they enter the stage.

Sonic: It’s probably going to be another one of those “I am the Eggman” songs he always plays. Boy, are those getting old.

Suddenly, the lights go out. A single spotlight shines over Eggman’s Doorway. Suddenly, the following song could be heard/sung as Dr. Eggman head up onto the stage.

For a moment after the song was over, there was silence. Then suddenly, the entire audience erupted in huge applause for Dr. Eggman. He waved to his adoring fans, and graciously bowed to the audience.

Bowser: Show-off. (Note to self: Make up a rap song for myself)

Toad: Okay! Now that the fighters have entered the ring, let’s get this fight started-

A Goomba with a red bowtie runs up to Toad and Toadette.

Toadette: Who are you?

Goomba: Sorry, I’m Gabby Goomba, GG for short. I was hired by Eric and Smashmatt to interview competitors in Tournaments like this.

GG walks up to Bowser.

GG: Okay, Bowser, the Big Boss of the Koopas. What do you have to say about this match?

Bowser: Match? HA! I bet this Egghead won’t be enough for me to even work up a sweat! I’m gonna cream him EASILY!

GG walks over to Dr. Eggman.

GG: And what about you, doctor? What do you have to say about this match?

Dr. Eggman: …Hmph. It would be a waste of time talking about this match, as this buffoon would not be able to comprehend my intellect!

Bowser: GRR! YOU’RE ASKING FOR IT!

Toad: Then let’s get this fight started!

GG: Wait! Now I’m supposed to give a prediction on who would win.

GG: okay, I’m going to go with Dr. Eggman on this one. You know what they say, mind over matter, and brains over brawn! The same could hold true for this fight!

Toadette: Speaking of predictions, just whom did you bet on now, Toad?

Toadette: Wow, taking a bit of a risk there, aren’t we?

Ref Guy: Okay, then! Let’s get this battle started! FIGHT!

Toadette: If he doesn’t move, he’ll be burned to a crisp!

Toad: Dr. Eggman was completely engulfed in the flames!

Toad: No way! There’s not even a single mark on Eggman!

Dr. Eggman: I knew I would be dealing with fire, so I constructed a fireproof outfit just for this occasion!

Bowser: Oh, yeah? Well how about this? KOOPA KLAW!!

Toadette: Bowser takes a deep slash at Eggman, but he missed! He’s about to fall off stage!!

Toad: Dr. Eggman could take advantage of this! Bowser’s just one push away from losing! …But, he’s not doing it. Instead, he’s going to the center of the stage.

Toadette: It looks like he’s looking for something. What could he possibly be doing?!

Toad: Bowser found his balance, and is now charging directly at Eggman!

Right where Bowser his Dr. Eggman, a bright glow began. The glow spread through the entire stadium, until the all of Toad’s Castle lit up! It shined so brightly it could be visible from Space!

The light eventually cleared, and everyone slowly recovered from the shock.

Toadette: I don’t know… Wait! What happened to the fighters! Ref guy! Ref Guy, are you there?

They looked, but could not believe what they saw.

Ref Guy: Yeah, I’m still here, but I feel a bit dazed… …What are you staring at? 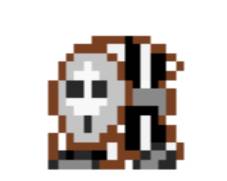 Ref Guy: What do you… WAH! What’s happened to me!?

Bowser: Ugh… What happened? Why do I feel… green?

Toadette: Maybe because you ARE green! 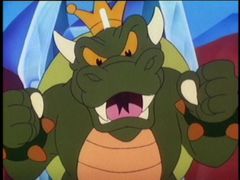 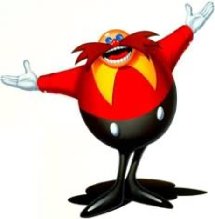 Toadette: Whoa! And just when you thought he couldn’t get any fatter!

Bowser: You! You did this, didn’t you! Change me back into my good-looking self, again!

Dr. Eggman: Heh heh! And why would I want to do that? It would mean changing me into my old self, and I have plans with the new form!

Bowser: Then I’ll have to beat the fat out of ya until you do!

Ref Guy: The fight is still on!

Toad: The New, Green Bowser charges in, but Eggman does a, err, rather bouncy leap into his Eggmobile!

Bowser: Two can play at this game! *whistles*

Bowser’s Koopa Clown Car (aka, his Clown Copter) flies in onto the stage; Bowser jumps into it.

Toadette: Now Bowser has called on his own flying vehicle, the Koopa Clown Car, to help him!

Two cannons appeared at each side of the Clown Copter, and fire Bullet Bills.

Toad: Bowser fires Bullet Bills at Eggman, but they didn’t do much!

Dr. Eggman: Ho ho ho! My Protective Armor is far too powerful for such a pathetic attack! Now taste my Laser Missiles!

Toad: Now Bowser is resorting to tossing Bob-ombs at Eggman! It looks like it’s working!

The blasts from the Bob-ombs hit Dr. Eggman, though they aren’t direct hits.

Dr. Eggman: So, you want to play with Bombs, eh? Well then, how about some of my Eggbombs!

Two catapults form at the sides of Dr. Eggman’s Eggmobile. He fires several Eggbombs at Bowser; nearly all of them are direct hits.

Toadette: Those Eggbombs are really taking a toll on Bowser! And to make matters worst, those Eggbombs look like Eggman, himself! As if we got enough of him, already!

Bowser: Ugh… It’s time to whip out the big guns! Or should I say BIG BALLS!

Toad: Uh oh, I don’t like where this is going.

Bowser begins to fly his Clown Copter sideways, and he fires a huge bowling bowl out at Dr. Eggman.

Dr. Eggman: OW! Oh, now I’m angry! That’s it! I didn’t think I’d have to use this attack this early, but you give me no choice! POWER LASER!!!

A HUGE front-end laser shoots Bowser’s Clown Copter right out of the sky!

Toad: WHOA! That was some attack! I don’t think anyone could have survived it!

Bowser, beaten and bruised, slowly gets up after falling from his now broken Clown Copter.

Dr. Eggman: Hmph! You just don’t know when do give up, do you? Well, I’ll knock some sense into you! Go, Checker Wrecker Ball!

A brown, checkered ball drops down from the Doctor’s Eggmobile.

Toadette slaps Toad. Meanwhile, Dr. Eggman brutally beats Bowser with his Checker Wrecker Ball, knocking him back and forth across the stage.

Toadette: Whoa! This is intense!

Goomba: NOT! I can’t believe I waited 2 months for this! I’m out of here!

Toad: NO! People are starting to leave!

The audience stopped moving out, and everyone stared at Bowser.

Toad: Bowser’s getting up! And yet… he doesn’t look too good.

Bowser was completely beaten. Some of his shell was cracked, his right eye was swollen shut, and he had several broken bones. He wiped some blood from his mouth before he continued.

Ref Guy: The fight is still on!

Toadette: Bowser sure has guts for standing up fter a beating like that! But what else can he do? There’s no way he can keep fighting! I mean, he can barely stand up, for crying out loud!

Dr. Eggman lashed out his Checker Wrecker Ball, again, ready for another beating.

Dr. Eggman: you will soon learn your place! I will be your ruler, Dr. Eggman, of the Eggman Empire! Prepare yourself!

Bowser withdraws into his shell ans spins rapidly! As Dr. Eggman swings his Checker Wrecker ball against him, it breaks into tiny pieces.

Bowser shots himself at Dr. Eggman, creating a huge explsion right into the center of the stage! The Crowd OOOed and AAAed as the explosion blew Dr. Eggman straight out of the stadium!

The crowd then roars with huge applause asbowser comes out of his shell, which was now more cracked then ever.

Toadette: Looks like we have a winner! Our very own Bowser!

Toad: YES! I WIN! And you lose, Gabby! …What happens when you lose?

GG: Nothing,it’s all in fun.

Bowser slowly walks off the stage. As soon as he leaves, he changes back to normal.

A group of Medi Guys come and carry Bowser to the infarmary.

Tails: They must be pretty strong to have beaten him…

Sonic: Eh, relax guys, you’ve still got me! When I go up to fight, we’ll win for sure, and this site will offically become a Sonic fansite!

Goomba: What are you guys talking about?

A Goomba was standing right next to them while they were talking?

Amy: GET LOST! Can some people have a private conversation!?

Amy knocks the Goomba away with her piko Piko Hammer.

Toad: Well, who thought this was an awesome fight?

Toadette: Well, that’s all we have for now! Join us next time where the two main girls of each series, Princess Peach and Amy Rose, kick off and the Fight for Toad’s Castle Continues!

Thanks to Luke Vancleef / Haku / Gaara for providing the pixel Ref Guy picture!